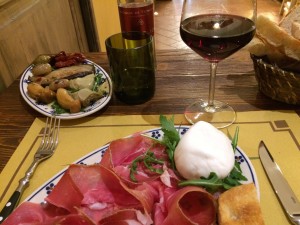 OK readers, switch on Pandora radio and find some pouty, minor-chord tunes. Break out the cheeseboards and stemless glassware. It’s time for a full-on whine session.

What do I have to whine about on this trip-of-a-lifetime?

(Besides the fact I can’t get Pandora. And don’t even mention Netflix.)

There. I admit it. For today only, I’m going to say it’s hard. Difficult. Frustrating. Dizzying, confusing, confounding. It’s really just the verbs and the nouns. And the adjectives. And the prepositions. So basically just everything. 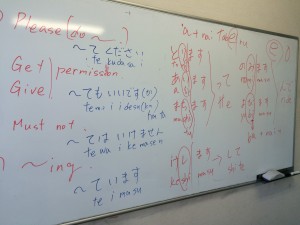 Just like verbs, the nouns all sound alike. As a bonus, there’s a completely different word if the noun refers to someone else instead of you. If you say someone is a teacher, they’re a sensei. But if you talk about yourself being a teacher, you’re a… Hold on, gotta look this up. There – you’re a kyōshi. And don’t get me started on counting nouns. If you ask for “one”, it’s a different word if it’s an animal, or a book, or a pencil, or a glass, or a piece of paper, or a car, or small object that is none of the above.

Adjectives have different endings when describing the past instead of the present. There’s two more endings when you make them negative (e.g. not good). And every word has to be followed by a preposition. (Is that a post-position?) Marcus-about work-to went. (Did I mention the verb is always at the end?)

Everything I do is wrong

It’s not just wrong, it’s downright rude. Offensive even. And not just the things I expected. Every day I learn about another thing I’ve been doing that’s wrong.

Bowing was something I expected to do wrong. Or not at all. It probably takes just as long to learn how and when to bow as it does to learn to speak the entire language.

But then I find out no one says you. It’s rude. So they say How is Marcus-san doing?, not How are you? There’s a specific phrase when a waiter brings your meal. Another one for when you’re done. Every day my teacher says No, we don’t say that or Make sure you say this otherwise you will offend people. Maybe it’s all a practical joke on her part.

It’s not just the things I say that are wrong, it’s everything. No matter which side of the sidewalk I try, it’s wrong. I never get wasabi when I order sushi. I’m sure I do things with my chopsticks that insult the chef’s mother. 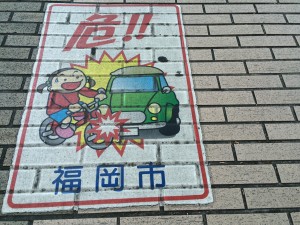 I can’t read the menus

I’ll survive if I fake my verbs and treat everyone around me like dirt. But I gotta eat. And I want it to be Japanese food, because it’s delicious. And I don’t do McDonalds. 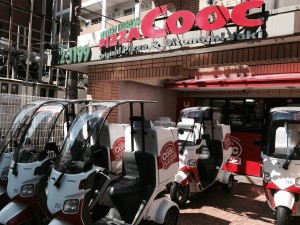 But I _did_ try the pizza. I’ll stick to ramen and sushi.

Then I walk into a restaurant where the menu is in hieroglyphs, the staff doesn’t speak any english, and I’m starving. I just want to eat something delicious that is not going to cost $100 and/or come out as squiggling octopus tentacles.

I pretty much pick my restaurants by whether they have pictures. If they have a combo, even better. I could eat sushi combos every day of the week. 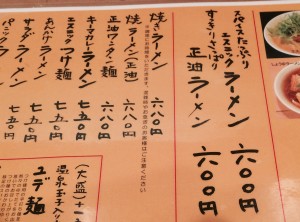 But you don’t find this out until you’re inside the restaurant. At that point, I’m stuck. No english, no pictures, no combos. At that point I fall back on What do you recommend? and hope it’s not the tentacles.

I’m trying to learn the menus, but there’s two alphabets and 4,000 hieroglyphs. I can sound out the alphabet characters, but all the important meaning is in the hieroglyphs. It’s getting so frustrating I almost don’t want to eat anymore. (I did not say that.)

Moving is a pain

Last act of the pity party. I’m tired of moving. I’m tired of packing my bags. I’m tired of weight restrictions. Just when I had a system, I flew a cheapo airline whose limit was 5 lbs less than everyone else’s. 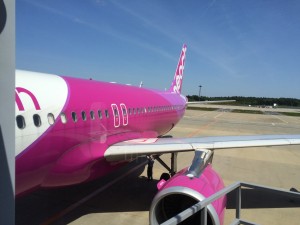 Cute plane, but I’d rather have my 5 lbs of luggage allowance back. (Actually, just get me there safely and I’ll be grateful.)

I’m tired of paying for taxis to to get me around. But not as tired as I am of sweating while I drag 100 pounds of rollerbags down sidewalks with cracks and curbs and cobblestones and whatever other obstacles come along. We’ve got bike lanes, how about luggage lanes?

I’m tired of finding places to stay. I spend hours each week researching neighborhoods, scouring airbnb for places with a/c, wifi, and a washing machine. I comparison shop against bookings.com. And I track it all to make sure i’m within budget, so my savings will last for a full year.

People ask if I’m going to visit Osaka or Nagoya or Sapporo. Not if I have to fly, take a train, or find a place to sleep. I’ll just stay here in Fukuoka, thank you very much. (Arigato gozaimas)

There. That’s out of my system. Because seriously, I know lots of memory techniques for verbs and nouns that sound alike. I’m just spoiled because I could cheat with Italian. It was just a blend of French and Spanish. Now I’m going to have to actually work. That may include taking pictures of menus and decoding them in my study time. 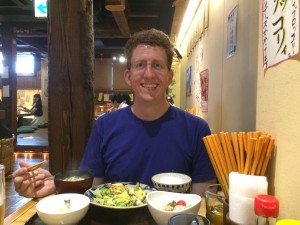 So maybe I won’t starve…

As for being rude, at least everyone has met enough foreigners to have zero expectations. I still have my money on the possibility my teacher is making it all up. Or at least exaggerating. Meanwhile, I’m getting used to being the bad-boy rebel and not caring. This may carry over when I return to the States. Girls dig jerks, right? (Let’s see how many comments that generates.)

Lastly, it was my choice to bring things I didn’t need and visit places I’d never been. I could have done some scouting trips last year. I could have planned to return to the States between countries. I could have put more in storage.

Instead I wanted the thrill of taking a risk and dropping myself into the unknown. I gotta accept that it will always seem like things could have been better. But maybe they’re perfect just the way they actually are. (Awww…)

Let me know in the comments if you actually drank wine while reading this post. And if so, what kind. Personally, I had a Robert Mondavi Woodbridge Cabernet Sauvignon. I miss Clos LaChance winery… 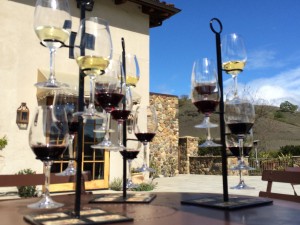 I seriously need to go back here…