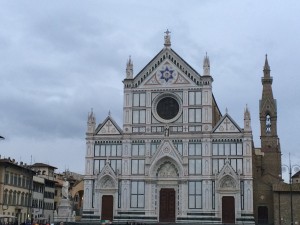 It only took a week for me to find my places in Florence.

I picked an apartment near the Piazza Santa Croce, whose basilica was begun in 1294 and finished in 1442. It’s huge and gorgeous, built with green, white, and pink marble. There’s a great big square in front of it, which is nice to hang out in when it’s sunny. I like to sit on a bench and study Italian grammar out in the fresh air. As an extrovert, the tourists milling around turn out to be very energizing. 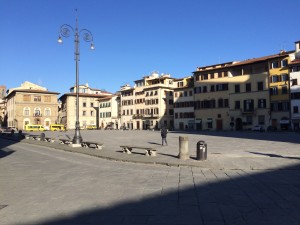 My cafe opens at 7:30. In Italy it’s typical to pay at the hostess station, get a receipt and then show it to the folks working the counter. This place seems to be more trusting. I see a lot of people ordering at the counter and then going up to pay later. Today I finally noticed the tiny sign in Italian and English asking customers to pay first. 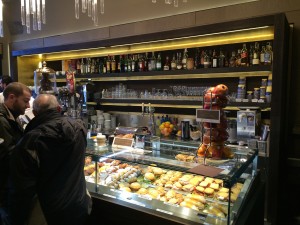 Most of the customers have their coffee and a pastry at the counter. But even the ones who grab a seat often pay after. That’s exactly what I did the first time. When I was done, I went up and said I wanted to pay. “Vorrei pagare”. She must have been watching me, because she rattled off exactly what I had ordered. 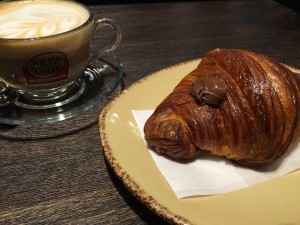 That’s a croissant filled with Nutella

My second time there I saw they had a machine to squeeze oranges. I ordered a “succo d’arancia” (orange juice). To my confusion, the barista reached down into fridge and poured a glass of juice from a bottle – not fresh squeezed. So I turned to my trusty friend, Google Translate to look up the word for “squeezed”. It’s “spremuto”. I asked the cashier if they served spremuto and he said they did. I just had to say order a “spremuta”.

This is what I love about just going out and speaking. Every day someone teaches me something in a real life context. One day I said benissimo (“great”) about a beer when I should have used the adjective “buonissimo”. Another time I said “morsa” for blackberry, instead of the correct “mora.

So far the places I’ve been able to practice are: the hotel, the taxi, the library, several restaurants, the grocery store, the farmers market, the laundromat, the pharmacy, and even the emergency room. Nothing dramatic, just an ear infection. Next up I’m looking to find a Toastmasters group and some kind of open mic night.

6 Replies to “My Florence”