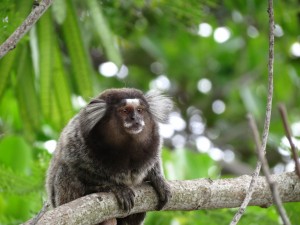 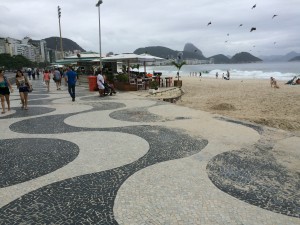 I woke up the first morning to nothing but grey skies. They covered the top of the Pao de Azucar hill, as well as the upper floors of 15 story hotels. They occasionally splattered the city with a light drizzle, and they stuck around for my entire trip. Don’t get me wrong, I still took my walks along the beach, I just kept my shirt on. 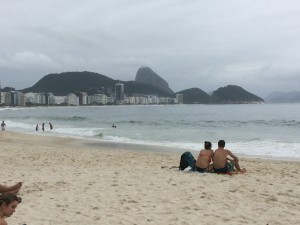 Fortunately I saw Pao de Azucar on my bus ride from the airport. For the rest of my trip it remained covered by the low cloudbank. There’s a smaller hill called Morro de Urca that serves as the first stop for the gondola trip. I had read about a hike to the top, so I figured that was worth getting some exercise and having an adventure. Plus it was free. 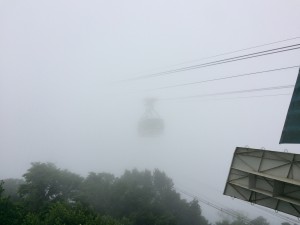 Not sure if it’s a fog bank or an inter-dimensional portal.

The hike was slippery, but experiencing an urban rain forest was worth it. I saw large royal blue butterflies flitting around. If nothing else, it was worth it for the marmosets chasing each other through the tree canopy. Even this smaller hill was almost fully cloaked in clouds, so the views were nearly non-existent. 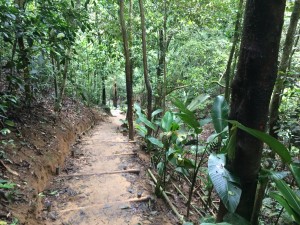 Really had to be careful not to slip and fall on my butt.

On my final day, I decided to visit the statue of Cristo Redentor. I’d at least be able to get a glimpse of the statue from up close, even if I couldn’t get any of the views from what is normally an amazing vantage point. Plus, this statue appears as a wonder in Civilization 5. (Plus 4 happiness, 10% reduction to social policy costs.) I was glad I went, even if it took 90 minutes to get there by subway, bus, and mountain train.

Here I am in front of the Cristo Redentor! 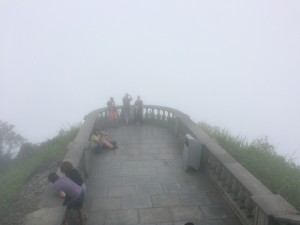 The observation deck is breathtaking! Look at the golden sandy beaches, the sparkling turquoise water, and the majestic green islands that dot the bay. Gorgeous! 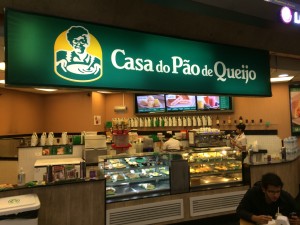 You don’t know how happy this made me.

The barbecue is amazing as well. The problem is that it is usually served all-you-can-eat “rodizio” style. Nowadays, happens when you choose destinations where you know you’ll love the food.

On my last night I went to a sushi restaurant. Right now the Brazilian Real is really low against the dollar, so a sushi dinner was reasonably priced. Even sushi can be ordered as “rodizio” all-you-can-eat. (But no waste.) I opted for a salmon platter with sashimi, nigiri, and rolls.

My only knock on the cuisine was that the coffee was sub-par. Although I started to like the fact that my small cappuccino was basically an espresso macchiato and came with cocoa powder.

I’m just going to say it, Brazilian Portuguese sounds weird. They never met a syllable they didn’t nasalize. I find Spanish pronunciation to be very straightforward, same for Japanese. French is smooth and chic, and Italian is musical and expressive. But Portuguese and German both have sounds that are just awkward, almost uncomfortable.

The other quirk is that “r” is pronounce like an “h”. “Rio” is much more like “hio”. Combine that with the nasalization, and I could hardly figure out what words were being said, much less what they meant. Fortunately, almost no one spoke English, so I got lots of practice. Good thing I brought my phrasebook with me.

Of course, I’m slightly disappointed I didn’t get to take the beautiful photos I expected because of the weather. But I did get to walk barefoot on the beach, so now my feet are delightfully smooth. I also got to briefly see the two landmarks I was most interested in. And I had fun playing with the little bit of Portuguese I could dust off. So while I wouldn’t call the trip a home-run, it was still an enjoyable experience. 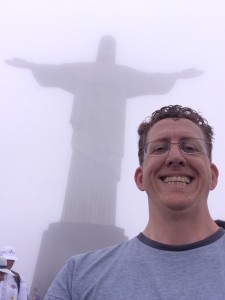 By the end, I’d gotten a pretty good look at the statue.

One Reply to “Rainy Rio”